DescriptionSystem RequirementsGame Media
Kerbal Space Program is a multi-genre game where players create their own space program.
In KSP, you must build space-worthy craft, capable of flying your crew out into space, without killing them. At your disposal is a collection of parts, which must be assembled to create a functional ship. Each part has its own function and will affect the way a ship flies (or doesn’t). So strap yourself in, and get ready to try some Rocket Science!

The game has different game modes, you can play the Career Mode if you want to expand and manage your own Space Center, taking on missions and researching new technologies. Or you can play Sandbox mode if you’re only interested in flying and discovering the Kerbal universe without restrictions. There is even a mid point between these two, Science mode.

The Vehicle Assembly Building and the Space Plane Hangar allows players to build spacecraft out of any imaginable combination of parts.

Fully-fledged, Physics-based Space Flight Simulation ensures everything will fly (and crash) as it should.

– Take your Kerbal crew out of the ship and do Extra Vehicular Activities.

– Fly out to Moons and other Planets.

– Procedural Terrain delivers detailed terrain at a vast scale. The Kerbal Planet is 600km in radius!

– Ship systems. Keep an eye out for engine temperatures and fuel levels, and try not to explode.

– Build ships with multiple stages, and jettison parts away as they burn out.

– Full control over the shipโ€s setup allows for complex ships and advanced functionality.

– Dock spacecraft together to build Space Stations, Massive Starships, or even surface bases on other worlds.

– Manage your crewmembers, hire them, and send them out into space and make them into heroes.

– Research and Develop new technologies to advance your Space Program.

– Take on Missions to attract interest in your Space Program.

– Discover new worlds and expand the scientific knowledge of Kerbalkind. 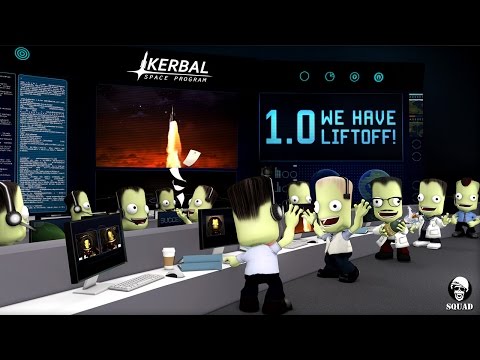 In Kerbal Space Program, take charge of the space program for the alien race known as the Kerbals.You have access to an array of parts to assemble fully-functional spacecraft that flies (or doesn’t) based on realistic aerodynamic and orbital physics. Launch your Kerbal crew into orbit and beyond (while keeping them alive) to explore moons and planets in the Kerbol solar system, constructing bases and space stations to expand the reach of your expedition.

thanks a lot working great and really easy to install

Thanks again guys for an awesome upload 🙂

so, when I try installing it, it won’t download

Very nice, but the game is not on the latest update, and there is no way to update it, how do we do now?

Can you please update it to the latest version. There’s lots of new things we’re missing in this version.

wow, the latest kerbal is huge now, unlike before :3

Thank you works and is latest as of 1.7.

could you upload the breaking ground DLC?

Hello
Please update
Thank you for everything

Thank you! Is it possible to add the new Breaking Ground DLC?

Hi! Please update to the latest including the dlcs when you can. Love everything you do on this site 🙂 Thanks for everything

Hi, the game has been updated to 1.9, can you post that version? Thank you

How do you install this?

I did, the game won’t launch, it starts for a second then crashes immediatly. It’s not blocked by anything as far as i can see

I haven’t tried any other version except the latest one, Kerbal Space Program v1.9.0.02781 + 2 DLC (GOG), that one. I should clarify, I click on the launcher, the launcher starts for half a second then closes itself, don’t know what to do :/

Can we get 1.9.1 added as well? Would be quite convenient

could add the Portuguese language

Hello, someone can leave me the link qith the 32bits version? because is for my old computer and i like to play this game

you are the best