ELEX II is the sequel to ELEX, the vintage open-world role-playing experience from the award-winning creators of the Gothic and Risen series, Piranha Bytes. ELEX II returns to the post-apocalyptic Science Fantasy world of Magalan – with massive environments that can be explored with unrivaled freedom via jetpack, you will be able to move through the epic story any way you want.

Several years after Jax defeated the Hybrid, a new threat arrives from the sky, unleashing the dangerous powers of dark Elex and endangering all life on the planet. In order to defend the peace on Magalan and the safety of his own family, Jax has to go on a mission to convince the factions to unite against the invaders and find his own son, Dex, who got separated from him …
Dive into a huge, hand-crafted, completely unique world with multiple factions and diverse environments set in a post-apocalyptic science fantasy universe.

The game allows you to:
– explore the planet of Magalan with unprecedented freedom, using your trusted jetpack to traverse the map and even fly!
– interact with a lived-in world, full of unique NPCs, who
– will remember what you’ve done and react accordingly
– will join or leave your group depending on how you behave
– are able to be killed, which will have an effect on the story
– engage in fluid close and ranged combat with a massively improved control system
– experience a story where your actions have consequences, immersing you in a world of moral decisions 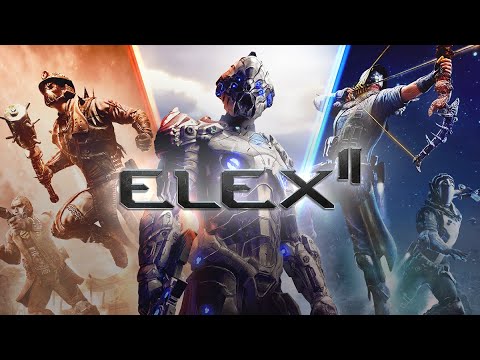 ELEX II is the continuation of ELEX, a vintage open world role-playing game from the famous Piranha Bytes studio, developers of Gothic and Risen. In ELEX II, you will return to the post-apocalyptic world of Magalan – thanks to the jetpack, you will have unprecedented freedom in exploring its many-sided expanses.Not even a few years had passed since Jax’s victory over the Hybrid, as a new danger fell on the planet from the heavens, bringing with it the most dangerous powers of dark elex and a threat to all living things.

bugged version of the game, at least for me only thing i see after starting is a skybox and thats it

downloaded Avast anti virus after I declined the offer downloaded a win zip type program and that’s all no game nothing more I.ve downloaded games from GOG may times and never had problems like this

are the patches going to be posted separately? Don’t want to download all 37gb just for the 1.01 patch

Guys, just updated the game with the latest version and patches from v1.00 – v1.02. Enjoy!

is there any way to get only the patch files?
it’s better to download one small patch instead getting the whole game again

Is 1.03 available for the GOG version?

Thank you for the patch, much appreciated

Hey freegogpcgames i tried elex 102 to 103 , i got this message, sending ss
resimyukle.io/r/hoWoa97kkQ

Guys, can anyone confirm this if it is working for you? Thanks in advance.

How do I install the patch?

Hello Guys, not sure why some cant install the patch 1.03 so we have posted the full release of the new version. If you are having problem with the patch please download the full game instead until found a solution. Sorry for the inconvenience and thanks for your patience.

Hello is this updated to latest?

but is directx 12 support only on steam?