Takamaru Ikusabe, a boy attending Jippou Academy, was
living a peaceful life in pursuit of love, despite constant
cockblocking by his landlord’s daughter, Narika Shihoudou.
One day, Takamaru encountered a girl who captured his heart
at first sight. Her name was Haruka Takamori.

That night, Takamaru and Narika were attacked by a
mysterious group of ninjas. The one who saved them from the
crisis was none other than Haruka, wearing kunoichi gear.

Haruka called Takamaru her master and asked him to perform
sexual acts with her. It turned out that Takamaru was the
young master of a heroic ninja clan known as the Crescent
Moons, and via sex, he had the ability to provide a
supernatural energy called Sex Power (SP).

Haruka obtained some SP from Takamaru and managed to fight
off the ninjas, but that was only the beginning of a long
and arduous battle.

The Crescent Moons:
Formally known as the Souha Crescent Moons, they’re a ninja
clan founded by the first Dragonian and a kunoichi. Their
extraordinary combat ability permitted them not to have to
work under a particular lord, but to follow the master of
the clan’s judgment in who would be best to assist at any
given time. Highly active behind the scenes throughout
Japan’s history, they once drove a monster known as Noroi
into a corner, but he managed to escape into the future.
With the objective of vanquishing Noroi before he could
return to his full power in the era where he would once
again appear, the Crescent Moons continued to fight to
protect their master as they honed their combative and
organizational abilities.

Haruka Takamori:
A Blade, the title given to the Crescent Moons’ strongest
kunoichis, who chased after Noroi from the past into the
future. For Takamaru’s protection, and to study the current
world herself, she began to attend Jippou Academy. Most of
the time, she’s just a normal girl observing modern society
and trying to fit in. Despite being in the same year of
school as Takamaru, she’s actually older than he is.

Her talent is so great that she achieved the rank of Blade
far faster than most, but she could never bring herself to
cross the line of giving her past master her chastity,
leaving her not truly a Blade at the time she arrived in
the modern age.

While normally a kind, warm, big-hearted girl, she becomes
an elegant warrior in battle.

Narika Shihoudou:
A girl three years younger than Takamaru, and the daughter
of his landlord and the head of the dojo he attends, Seigen
Shihoudou. Actually a member of the Crescent Moons, she
didn’t initially participate in combat, but certain
circumstances led to her becoming a Blade and throwing
herself into a life of sex and fighting.

Though well practiced in martial arts, her personality is
that of a normal girl, and she particularly loves anything
sweet. She’s hit on around town frequently enough to be
aware of how cute she is, but still has feelings of
inferiority when put next to Haruka’s body and personality.
Albeit cold at times, she’s a caring girl at heart and has
positive feelings for Takamaru.

Takamaru Ikusabe:
The protagonist of this story. By way of a ritual called
Dragon Synergy (which is essentially sex), he can give his
sexual partners a supernatural energy called Sex Power.
Although not initially aware of it himself, he’s lined up
to become the 23rd master of the ninja clan known as the
Crescent Moons, and fated to fight Noroi. Upon Haruka’s
appearance, he was determined, if not bewildered by the
revelations, to fight the Noroi Faction.

Akira Kurogane:
The school nurse at Jippou Academy. Holds an unlit
cigarette in her mouth at all times. Familiarly referred to
as Ms. Akira by the students, she gives them, including
Takamaru, advice for both their public and private affairs.
It turns out that she’s a member of the Crescent Moons, and
effectively the acting commander in the fight with the
Noroi Faction.

Subaru:
A Blade of the Crescent Moons, as well as Haruka’s close
friend and senior kunoichi. During the effort to stop the
Noroi Faction from traveling to the future, she lost to one
of their leaders, Ittou Hagane, after which she was
imprisoned in Castle Infinity.

(The following two are less important)

Noroi:
A mysterious being worshipped by Ensai and the Noroi
Faction as the Lord of Salvation. He feeds on the grief,
fear, and sorrow of mankind, and provides the Noroi Faction
with supernatural power such that they can better produce
it. Once put on the brink of death by the Crescent Moons,
he fled to the modern era, where there was a high
population, but few who could oppose him.

The Noroi Faction is a combat group founded by Ensai
Mukuroi that fights for “True Eternity”, an ideal in which
they use Noroi’s power to destroy human civilization and
create a world of everlasting peace through fear.

Ensai Mukuroi:
One of the Tetra Sealers, the four leaders of the Noroi
Faction, as well as its founder. His title is the Black
Guardian. A blind monk, his eyes produce a constant stream
of bloody tears. He founded the Noroi Faction to achieve
True Eternity, his ideal for the world in which peace is
created through fear.

Ittou Hagane:
The Tetra Sealer swordsman known as the White Guardian.
Albeit ranked as the Noroi Faction’s second-in-command,
he’s rumored to be its strongest member. When Haruka and
Subaru tried to stop the time leap in the past, he severed
one of Subaru’s arms, displayed his overwhelming
superiority. His chosen name itself means “Sword”, as he
sees himself as the sword cleaving its way to his ideals.

Kikyou-dayu:
The Tetra Sealer known as the Red Guardian.
Unlike the other Tetra Sealers, she’s driven purely by ego,
and her self-obsession itself gives her great power.

Orochimaru:
The Tetra Sealer known as the Blue Guardian.
The newest member of the Tetra Sealers, he strongly opposes
anyone who claims to fight for justice and sees the Blades
as his rivals.

(The following are all less important)

The Demonic Enchantress – Minazuki
A student from the modern day who received Noroi’s power
and became a Kainin. She hates anyone who commits crimes
(especially sexual harassment) and charges them with severe
punishments. Despite her villainy, at her core, she’s just
a needlessly stern girl with an annoying fixation on the
rules.

The Demonic Doctor – Gennai Shuraga
A doctor Kainin. An egomaniac, he’ll do anything to find
the truth he seeks, no matter who has to be sacrificed.

The Demonic Princess – Almer
A magical girl Kainin. She looks and acts like she’s
spacing out half the time. Full of curiosity, she’ll do
things like make a merry-go-round out of people’s cars for
fun, unaware of the danger she’s causing. And having her
fun interrupted only makes her angry.

The Phantasmic Fungus – Takemura-doujin
A mushroom turned into a Kainin with a laid back manner of
speaking. He believes mushrooms should be the dominant
species on Earth over humans. Losing to him will result in
the Blades becoming his mushrooms’ toys, or even having
mushrooms cultivated using their bodies.

The Phantasmic Puppeteer – Lurrie Joe
A combination Kainin made up of Lurrie, the puppet and
master, and Joe, the puppeteer and servant. They sell
manipulation threads, string that can be used to control
humans, in an effort to throw the world into chaos.
Losing to them will result in the Blades being controlled
to say and do obscene things they never normally would.

The Phantasmic Cojones – Gokutarou-danuki
A tanuki Kainin who takes pride in his giant balls. He
fills men with an overwhelming amount of vigor and drive,
leading them to go on rampages. His unique laugh sounds
like “Dohyew hyew hyew hyew!”

Genin
The Noroi Faction’s fighters. All they can say is “Nunja!”
There are also higher ranked ones called chunins and
jounins.

Summary-
This game is a transforming heroine raising sim using
ninjas as a motif.

You play as Takamaru Ikusabe, the next master of the ninja
clan known as the Crescent Moons, and have sex with the
heroines to power them up, as well as give them orders in
combat, with the goal of defeating the Noroi Faction within
a certain number of days.

Game Flow:
The game is divided into days, where each day has a Morning,
Afternoon, and Night phase.

Morning/Afternoon Phase Options-
The morning and afternoon phases have the same options,
intended for preparing for battle. They are:

Dragon Synergy-
Perform Dragon Synergy (Sex) with your heroine of choice.
If it’s successful, the heroine will recover a certain
amount of SP and receive a specified bonus. If it fails,
the difficulty of the attempted Dragon Synergy will
decrease by the amount you rolled.

Raise Libido-
Increases your Libido level. For every 10 Libido, you
recover one more die at the end of each day.

Enemy Search-
Searches for Kainin and genins around town. You can’t fight
an enemy without having confirmed its presence first, and
you can’t use Enemy Search at night, so make sure to do it
ahead of time.

Info/Skills-
View info on each character or spend SP to learn skills.
A character can only learn up to three skills.
Choose wisely.

Three-Way Choices:
In discussions with the heroines, you’ll sometimes be given
three choices, each of which may affect different
parameters.

Night Phase:
The night phase is mostly focused on stopping the Noroi
Faction’s evildoing around town.

Deploy-
Fight Kainin or genins that you’ve previously discovered
with the Enemy Search command. The blue markers indicate
genins you can fight, while the red markers indicated
Kainin or even stronger enemies. The grey markers are
undiscovered enemies and can’t be fought.

Combat:
Winning a fight will restore your Peace Points.
Losing, however, will result in the heroine being punished.
Specifically, losing to a Kainin will result in an H-scene.
Not only that, but losing to the same Kainin a second time
will give you a new, even more extreme H-scene.

Castle Raid:
As the game progresses, Tetra Castles being defended by the
Tetra Sealers appear. The only way to reach the enemy base,
Castle Infinity, is to bring them all down.

Each floor of the castle has multiple routes to pick,
containing enemies, traps, and treasures, at the end of
which is a boss. On the top floor of each castle is a Tetra
Sealer, enemies who surpass genins and even Kainin.
Be prepared!

End of Day Results:
At the end of the day, a screen will show how many days
have passed so far, your current action points, and the
change in your Peace Points. The Blades’ Barrier and your
action points will recover on this screen. 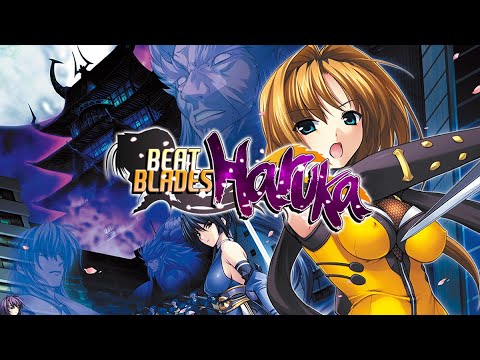 akamaru Ikusabe, a boy attending Jippou Academy, was
living a peaceful life in pursuit of love, despite constant
cockblocking by his landlord’s daughter, Narika Shihoudou.
One day, Takamaru encountered a girl who captured his heart
at first sight. Her name was Haruka Takamori.