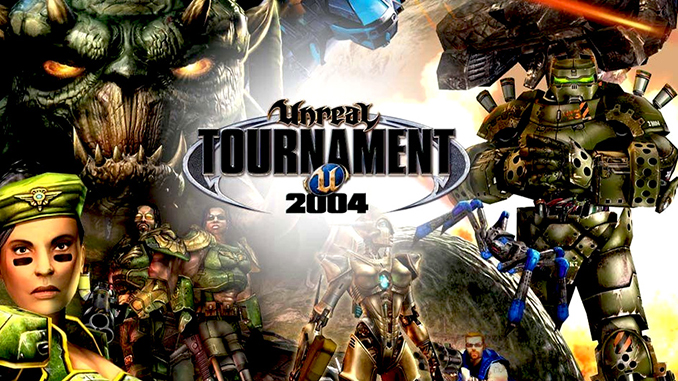 Unreal Tournament 2004 offers up the kill-or-be-killed experience of gladiatorial combat in 10 game modes – both team-based and “every man for himself” – which provide even the most hardcore gamer with palm-sweating challenges through unbelievably detailed indoor arenas and vast outdoor environments.

Face off to defend and attack fortified bases in the fan-favorite Assault Mode, and take team combat to the next level in Onslaught Mode, which brings vehicular combat into its own with a variety of land-, air- and space-based vehicles. Over 95 maps are available, including more than 45 brand new maps for all existing gameplay modes.

The entire smorgasbord of frag-dealing weaponry from UT2003 returns in addition to three new implements of doom: the Mine layer, the anti vehicle rocket launcher (AVRiL), and the Grenade Launcher.

UT2004 introduces 32 new characters on four new teams: The human Thunder Crash, lead by Tournament hero, Malcolm; the Robotic Corrupt, lead by an upgraded Xan Kriegor; the Iron Skull, a team of merciless Skaarj warriors; and the Hellions – reckless human mercenaries and pirates who delight in the thrill of the kill.

As the ultimate techno-gladiator of the future, take fate into your own hands in UT2004, and battle against up to 32 other players online in action-packed, frag-filled arenas.

Be sure to check out our Mod Spotlight for Unreal Tournament 2004 ECE!

Multiplayer mode is available after registering your unique CD-key for the game. For details see: Support.

The Aquatic Adventure of the Last Human