As a new student of Luke Skywalker’s Jedi Academy, follow an ancient tradition and learn the powers – and dangers – of the Force™.

As a Dark Jedi Cult knows as the Disciples of Ragnos threaten the galaxy, Jaden Korr, a student of Luke Skywalker’s Jedi Academy must learn the ways of the jedi in order to defend it. On the path to becoming a Jedi Master Jaden must fight through various missions taking place accross the galaxy, from Hoth to Tattoine. Upon each victory, Jaden’s powers grow until eventually becoming an apprentive to Kyle Katarn, and must fight the temptation of turning to the dark side.

Interact with famous classic Star Wars™ locations and characters while facing the ultimate choice: fight for good and freedom in the light side or follow the path of power and evil to the dark side. Create your own characters by defining various characteristics, such as species, gender, clothing and physical attributes allowing for a more personal experience before entering the academy to learn the powers – and dangers – of the Force™. Construct your own lightsaber™ from handle to blade color. Unique tiered level selection allows you to choose you adventure and the missions you take based on the skills you need to become the ultimate Jedi Knight. 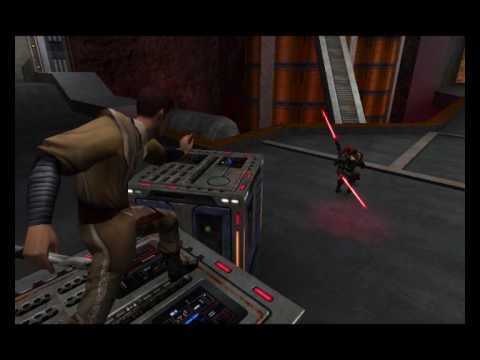 i don’t understand this played just fine on my computer no problem and i have windows 10. whats with all the complaints i didn’t even have to run in compatibility mode. oh well thanks for this game! i actually own a physical copy however THAT i don’t think would install properly being so old plus…its just easier to do it this way…don’t have to insert disc 🙂

wow first time i played this game my cd broke inside the dvd writer lol for real took me like 2 weeks to finish it since i had school and was more out with friends then in but played it daily like 1h per day or so is fun especially since i got to choose a new lightsaber and chose double balded one, was a bit hard tho i didnt have internet back then so that mission in the desert took me a while to figure out how to do it whitout those worms eating me haha speed skill and run like hell xD i used grenades to distract the thing haha they didnt make another star wars game like this with character having complete freedom like omg it can jump so far, force unleashed is more like watching a movie rather then playing a game so is only the illusion of freedom so yeah didnt get to play it since, my cd cracked inside the pc lol ( couldnt play the game whithout the cd in ) , does it work on windows 10? i want to try it again , i hated the mission where you got caught in a trap and had to escape whithout a lightsaber, man i died so much in that mission i hated it found out later u can skipp a mission or 2 if u complete the rest like every chapter needs you to finish a certain number of missions before u can advance and the rest like 2-3 left are like bonus for more xp and stuff but after first playthru i skipped the hard ones lol, i think it was my 3rd time playing when i figured out how to play that mission on speeder game was created by geniuses like gothic series , one of a kind

I hope you guys realize that this game were and still be the best star wars pc game ever made. Single and Multiplayer online.

For everyone asking: yes every mod will be working on this version if mods like movie duels, movie battles II don’t work for you just simply download a package with all c++ and it will work https://www.techpowerup.com/download/visual-c-redistributable-runtime-package-all-in-one/

Thank you guys for all uploads !
Love ya guys and thanks for all Freegog !