They’ve licked their wound, improved their techniques, and now they’re back! The world’s 15 fiercest warriors clang steel in a fast and furious fest of fencing festivties. Use new characters and new feints of Fury to hack, slice, dice and Julien fry your way to victory.

This is a fighting game released in 1994 that follows 15 samurais in their individual quests. The rage system, which was popular in the first game, has been further enhanced. Not only does attack power rise when the gauge is full, the player can also use a special technique that can break the opponent’s weapon and force the opponent to fight unarmed. The game also allows for more movement techniques such as back-stepping, rushing forward, and ducking, allowing for even more strategies. A fun and important detail of this game is that one of the new characters, Cham Cham, was voiced by voice actress Reiko Chiba, who is an idol in the gaming community. 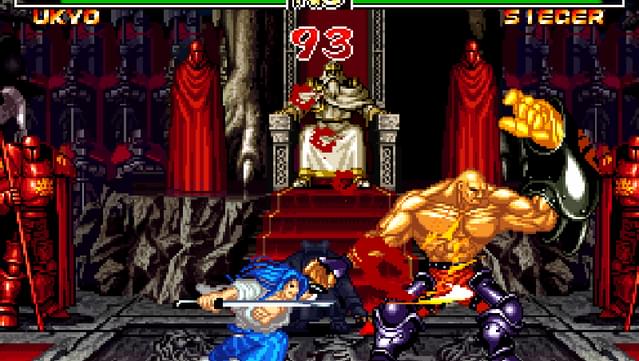 They’ve licked their wounds, refined their fighting styles, and now they’re back! 15 of the most powerful warriors in the world come together in a furious fencing festival! With new characters and abilities, make your way to victory!